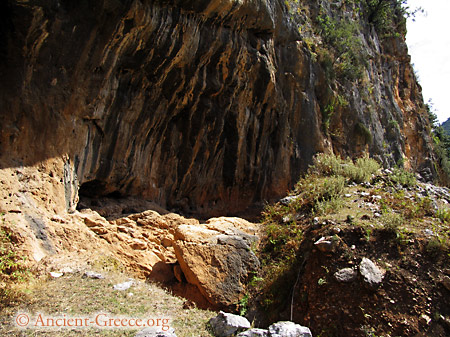 Asprochaliko is a rare Paleolithic rock-shelter in Greece.

Asprochaliko is a small archaeological site in the southern end of Epiros, Greece.

According to the information on the site, this rock shelter was excavated between 1964 and 1966 and has a 6-meter sequence of Mousterian and Upper Paleolithic layers. Over half a million flaked stone tools and fragments of animal bone were found during excavations. The site was in use from 100,000 years ago, probably in spring and autumn by nomadic hunters who followed animal herds through the mountains of Epirus. Bone evidence from the site indicate that in this narrow valley around the river Louros lived and migrated herds of red deer, elk, ibex, aurochs, and even rhinoceros.

The base of the deposits is dated to the Middle Paleolithic era and flint tools characterize the finds. A multitude of Middle Paleolithic levels separate this base and the upper levels where "evidence of a stone-tool industry dominated by small "backed" blades (blades on which one edge is blunted by retouching) used as projectile points." (Runnels and Murray 28)

Curtis Runnels and Tjeerd Van Andel, indicate in the Landscape Archaeology in Southern Epirus, Greece I that Asprochaliko seems to have been "a highly specialized site in a larger, hierarchical system." and that the population of the entire Preveza province at the time "was probably limited to a single small band of ca. 25 to 75 persons resident on a seasonal basis (116).

The same source tells that Asprochaliko cave was abandoned sometime at the end of the Pleistocene period (130).