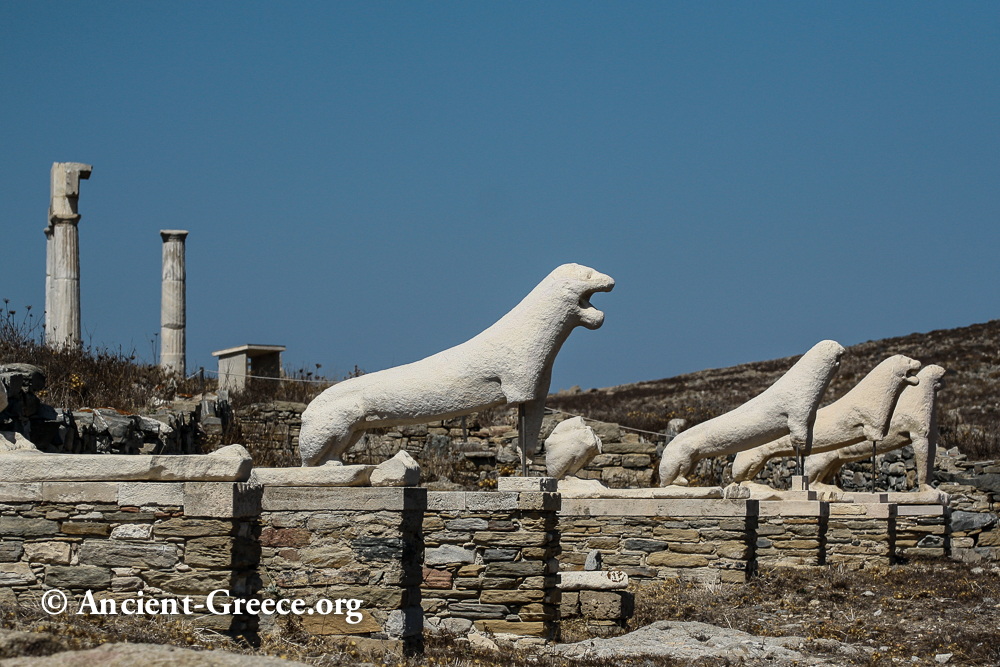 The Terrace of the Lions.
The crouching lions standing at the original location are replicas of the surviving ones. The original marble lions are located in the Delos museum to be protected from further erosion. See more photos.

Delos (Δήλος) was one of the most sacred places of ancient Greece, and one of the most robust trade centers as well. The island undoubtedly owed its success to its superb location at the very center of the Aegean, allowing seafarers to meet it in the middle of their journey as they sailed from the major commercial centers of the Aegean--Athens, Miletos, Corinth, Macedonia, Thassos, Samos, Milos, Rhodes, and Crete, to name a few. Its importance also made it coveted by the most powerful maritime powers that strove for control of its harbors and sanctuary.

There is evidence of habitation in the island that dates back to 3000 BCE, and of elevated importance during the Mycenaean period (1580-1200 BCE). Its reputation as a sacred island began attracting large numbers of devotees, and along with them trade flourished, transforming Delos into a robust commercial port for almost a thousand years after the 8th c. BCE.

Its claim as the birthplace of Apollo gave Delos a strong religious identity that lasted all the way until Byzantine times. In an era when religious festivals were economic engines, attracting thousands of pilgrims and generating healthy economic growth, Delos stood strong at the center of the wealthiest commercial centers and benefited greatly.

Despite being wind-swept and almost barren of vegetation, it had several features that made it conducive to habitation (probably reached 25000 inhabitants by the early 1st century BCE). The island's several harbors and position in the middle of the Cyclades put it on the map of every sailor of antiquity, and the island also had an excellent supply of water from two sources: flowing all year in the small river Poppins and trapped in a layer of limestone that covers a layer of granite below.

Its small size (about 5 x 1.3 km) however made the island vulnerable and easy pray for several powerful maritime powers through the centuries. Naxos and Paros attempted to establish control of Delos early in Archaic period, but it was the Athenians that dominated the island on and off for almost five hundred years. The Athenians initiated two "purifications" of the island. The first one in 540 BCE decreed that all burials within sight of the temple of Apollo be removed, while the second purification in 426/5 BCE removed all burials, and forbade births and deaths on the island. After the Persian wars, starting in 478 BCE, Delos hosted the treasury of the Delian League before its subsequent relocation to the Athenian Acropolis–much to the displeasure of many members of the alliance.

By the end of the 4th century the Hellenic kingdom of Macedonia became the island's protector, and the Delian population doubled with many citizens of other cities settling on the island to take advantage of its position as a strong commercial center. But after the Roman conquest of Greece, the Athenians dominated the island once again and promptly removed all Delians, replacing them with poor Athenians who received pastures on the island by lot. The island continued to enjoy wealth and fame, which led its population to increase.

Over the centuries, Delos was truly a cosmopolitan center with a diverse population that included people from all around the Mediterranean, but in 88 BCE the Romans razed the island during their war with Mithridates (an ally of the Athenians who controlled the island), a calamity Delos never recovered from. Away from the limelight for several centuries, its population dwindled and by the 3d century CE only a small Christian community called it home. Subsequently, Delos was plundered several times in the 8th and 9th centuries and during Ottoman occupation the nearly deserted island became and remained a pirate stronghold. The ancient ruins were also pilfered for marble and stone which were used by the nearby islanders for their own construction needs.

The French School of Archaeology began excavating Delos in 1873. Today Delos is an archaeological site reachable by boat from Mykonos. A small museum among the ruins shelters and exhibits some of the important objects unearthed during the ongoing excavations.