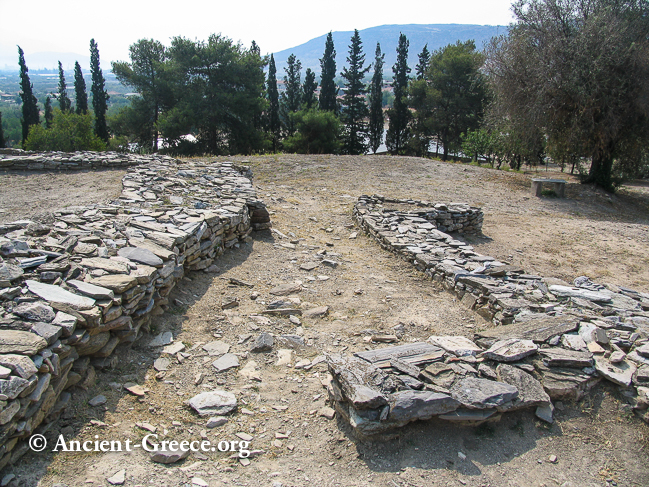 The excavations on the low hill revealed an extensive stone age settlement that was originally much closer to the west shore of Pagasitikos Gulf. The site was inhabited continuously from late Neolithic period (4800-4500 BCE) in mud brick houses built over foundations made of local stone, all enclosed in a roughly circular external low wall which was also made of local slate stone.

The complexity of the building construction, town planning, and the unearthed artifacts denote a thriving and sophisticated stone age community. The function of the perimeter wall as defensive has been questioned, but the existence of several large communal buildings atop the hill is evidence of a well organized community with a rich social culture.

The existence of the perimeter walls and the separation of the houses have prompted speculation that social divisions led to segregation of different families within the settlement. The existence of a central court and the large "Megaron" structure in the middle of the village indicates a certain cooperative hierarchy and social division unseen in previous eras. In any case, the emphasis on privacy is a new development in Middle Neolithic settlements like Dimini.

Walls separate the houses, which have doors opening into public space, and cooking took place inside (as opposed to the previous custom of cooking in an outdoor area besides the houses). A ceramic kiln was excavated in the settlement and several graves.

The settlement remained in use until the final Neolithic period, and even into the beginnings of the Bronze Age. Subsequently, it was abandoned for a brief period of time only to re-emerge as a thriving Mycenaean center which developed east of Neolithic Dimini. Despite extensive plotting, the Mycenaean settlement has not been excavated beyond the unearthing of two impressive Tholos tombs. There has been speculation that this is the location of ancient Iolkos itself - the famous departure port of Jason and the Argonauts.