History of the Acropolis

The Acropolis rock is part of a Late Cretaceous limestone ridge (Higgins) that cuts through the Attica plateau in the northeast to the southwest axis and includes the Likavitos hill, the Philopappos (Museum) hill, the hill of the Nymphs, and the Pnyx.

The rock rises from the basin about 70 meters and levels to a flat top 300 meters long by 150 meters wide. Its flat top is due to the numerous landfills that have accommodated construction of fortifications and temples since the Mycenaean era. With its many shallow caves, the abundant percolating water springs and steep slopes, the Acropolis was a prime location for habitation and worship location for Neolithic man. 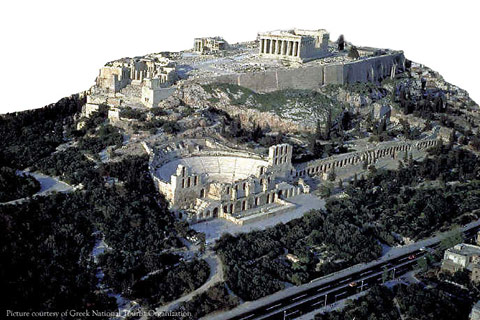 While the area around Attica was inhabited during the Upper Paleolithic period (30000 – 10000 BCE), archaeological evidence suggests that the small caves around the Acropolis rock and the Klepsythra spring were in use during the Neolithic Period (3000-2800 BCE).

The chronicle of the Acropolis of Athens is lost in prehistory, to a time even before the plane of Attica began to be cultivated. In Mycenaean times small towns developed around a fortified citadel where the king resided and controlled the surrounding area.

Acropolis in Greek literally means “the highest point of the town”. While virtually every city had an Acropolis, like Mycenae and Tyrins, the Athenian citadel became synonymous with the word in the minds of most people during the last two millennia. The Mycenaean civilization established many important centers, one of which was Athens. The first inhabitants we can trace to the Acropolis of Athens were Mycenaean Kings who fortified the rock with massive eight-meter tall walls, and built their palaces there in the 14th century BCE. Very little remains from these buildings today, but the most obvious evidence of this era is still visible at the southwest end of the Acropolis, right behind the later Temple of Athena Nike, next to the Propylaia, in the form of a cyclopean wall that was built as part of the fortifications. According to Dontas, Mycenaean kings built a palace at the north end of the rock “where the Archaic temple of Athena was later built, or a little further east on the summit of the hill” (The Acropolis and its Museum, 6). Besides a fort and a place of royal residence, the Acropolis functioned as a place of worship for the Goddess of fertility and nature, and for her companion male god Erechtheus.

Just like Mycenae and Tyrins, the Acropolis of Athens had its own underground water supply in the form of a deep well, dug at the north end of the rock, which could be used by the defenders during a siege.

The city of Athens

Athens was a thriving Mycenaean center that very early in its existence became the center of a “synoikismos”, an alliance and peaceful coexistence of all the adjacent towns. According to legend, king Theseus united the towns into one administrative entity, and this synoikismos appears to be instrumental in the city’s survival when all other Mycenaean centers were destroyed around 1200 BCE by invading hordes from mainland Greece, or due to a possible invasion of tribes from the North (what many refer to as the Doric invasion). While all other Mycenaean centers, including mighty Mycenae, were deserted during this period, Athens was the only town to remain inhabited and active. According to tradition, the city owes its survival to the heroic personal sacrifice of king Kordos.

In subsequent years Athens was ruled not by one king but by a group of men, the Aristocrats. Administrative functions moved away from the Acropolis towards other parts of the city where later the Agora developed. The Acropolis then became exclusively a place of worship and never hosted another ruler, partly because the new realities of city administration made it inconvenient, and partly because the Athenians wanted to eliminate all references to a monarchy.