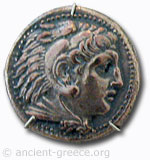 The Hellenistic Age marks the transformation of Greek society from the localized and introverted city-states to an open, cosmopolitan, and at times exuberant culture that permeated the entire eastern Mediterranean, and Southwest Asia. While the Hellenistic world incorporated a number of different people, Greek thinking, mores, and way of life dominated the public affairs of the time. All aspects of culture took a Greek hue, with the Greek language being established as the official language of the Hellenistic world. The art and literature of the era were transformed accordingly. Instead of the previous preoccupation with the Ideal, Hellenistic art focused on the Real. Depictions of man in both art and literature revolved around exuberant, and often amusing themes that for the most part explored the daily life and the emotional world of humans, gods, and heroes alike.

The autonomy of individual cities of the Classical era gave way to the will of the large kingdoms that were led by one ruler. As Alexander left no apparent heir, his generals controlled the empire. They fought common enemies and against each other as they attempted to establish their power, and eventually, three major kingdoms emerged through the strife that followed the death of Alexander in 323 BCE and persisted for the most part over the next three hundred years.

Egypt and parts of the Middle East came under the rule of Ptolemy, Seleucus controlled Syria and the remnants of the Persian Empire, while Macedonia, Thrace, and parts of northern Asia Minor came under the hegemony of Antigonus and his son Demetrius. Several smaller kingdoms were established at various times, in Hellenistic Greece. Notably, the Attalid kingdom was formed around Pergamum in eastern Asia Minor, and the independent kingdom of Bactria was created after Diodotos led a rebellion of Greeks there against Seleucid rule. Most of the classical Greek cities south of Thessaly and on the southern shores of the Black Sea remained independent.

Several Greek cities became dominant in the Hellenistic era. City-states of the classical Greece like Athens, Corinth, Thebes, Miletus, and Syracuse continued to flourish, while others emerged as major centers throughout the kingdoms. Pergamum, Ephesus, Antioch, Damascus, and Trapezus are few of the cities whose reputations have survived to our day.  None were more influential than Alexandria of Egypt however. Alexandria was founded by Alexander the Great himself in 331 BCE and very quickly became the center of commerce and culture of the Hellenistic world under the Ptolemies. Alexandria hosted the tomb of Alexander the Great, one of the Seven Wonders of the World, the faros (lighthouse) of Alexandria, and the famed Library of Alexandria that aspired to host the entire knowledge of the known world.

Many famous thinkers and artists of the Hellenistic era created works that remained influential for centuries. Schools of thought like the Stoics, the Skeptics, and the Epicurians continued the substantial philosophical tradition of Greece, while art, literature, and poetry reached new heights of innovation and development through the work of Kalimachus, Apollonious of Rhodes, Menander, and Theocritos. The sculptures and canons of Polykleitos remained influential and were copied throughout the Hellenistic and Roman Eras, and even centuries later during the Italian Renaissance. Great works of art were created during the Hellenistic Era. In Architecture, the classical styles were further refined and augmented with new ideas like the Corinthian order which was first used on the exterior of the Temple of Olympian Zeus in Athens. Public buildings and monuments were constructed on larger scale in more ambitious configuration and complexity. The Mausoleum of Pergamum, merged architectural space and sculpture by the placement of heroic sculptures in the close proximity of a grand staircase.

Hellenistic Greece became a time of substantial maturity of the sciences. In geometry, Euclid’s elements became the standard all the way up to the 20th c. CE., and the work of Archimedes on mathematics along with his practical inventions became influential and legendary. Eratosthenes calculated the circumference of the earth within 1500 miles by simultaneously measuring the shadow of two vertical sticks placed one in Alexandria and one in Syene. The fact that the earth was a sphere was common knowledge in the Hellenistic world.

The Hellenistic age was by no means free of conflict, even after the major kingdoms were established. Challenges to the Hellenistic kingdoms appeared from internal conflict and new external enemies. The size of the empire made securing it next to impossible, and life outside the orderly large cities was filled with danger from bandits and pirates. Internal strife and revolutions caused the borders of the kingdoms to be shifted several times as the rulers of the major and minor kingdoms engaged in continuous conflict. At the same time serious threats to the Hellenistic world came from external threats. A Celtic people, the Gauls invaded Macedonia and reached southern Greece in 279 BCE attempting to plunder the treasure of Delphi, which was miraculously saved (Pausanias, 20). Eventually, Attalus defeated the Gauls after they crossed into Asia Minor.

At the time of Hellenistic Era, Rome had risen to a formidable power and by 200 BCE occupied not only Italy, but also the entire coastal Adriatic Sea and Illyria. During the second Punic War (218 - 201 BCE) when Hannibal of Carthage managed to establish a successful campaign against the Romans in Italy, Philip V of Macedon allied with him and annexed Illyria, starting thus a series of wars with Rome that led to the eventual annexation of Greece by the Romans. In the end, large part of the Hellenistic kingdoms disintegrated by constant incursions by tribes of the fringes, many parts were simply given to Rome through the will of deceased rulers, and others won brief independence by revolution. In 31 BCE Octavian (later Augustus) defeated the rulers of Egypt Anthony and Cleopatra in the naval battle of Actium, and completed the demise of the Hellenistic Era.

The battle of Actium is considered the pivotal moment that defines the end of Ancient Greece. After the battle of Actium, the entire Hellenic world became subject to Rome. Greece in the next two thousand years was to undergo a series of conquests that made its people subjects of numerous powers and did not gain its self-determination until the 19th C. CE.

Back to the History of Greece

Further reading in the Bibliography