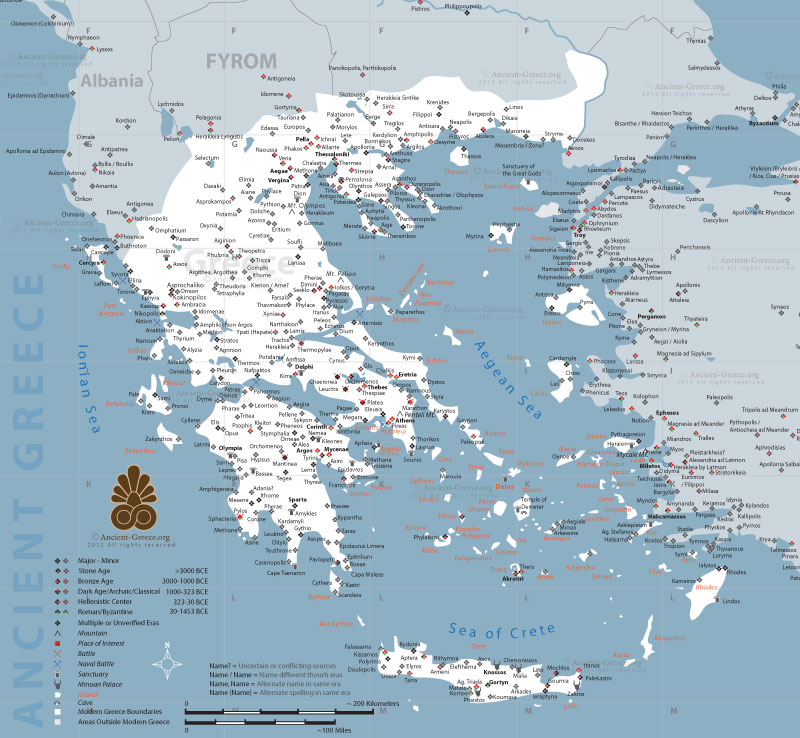 The map above displays the ancient Greek cities, places of interest, and centers of influence within and without the borders of the modern country.

This map is divided into smaller areas to facilitate easier viewing over the internet. Click on each orange square to see each area.


The following version is availabe via Google Maps. It contains just about the same data, except the maps above are updated and will continue to be updated.

How to use the above map


Open this legend in a new window
*please note that not all sites have been identified in terms of "era". This is a long, ongoing process and the map will be updated as time allows.

This map takes advantage of Google Maps architecture, and it is growing over time. I put it together for my own research purposes, but soon realized that it could be a useful tool for others.

In this map I have identified as many of the major and minor cities, and places of interest of Ancient Greece. To complete the task, I consulted multiple resources, original research papers, old and modern maps, online hints, and ancient texts relevant to each place on the map.

I have identified each site as either approximate, or accurate. You will find these designations on the pop-up window after clicking on each map place:

Accurate Placemarks: If neither "approximate" nor "general" appear in the pop-up window, the placemark indicates the exact location on the map of the ancient Greek place. Most often, the ruins of the place are visible in "Satellite" view under or near the placemark after zooming in. By "accurate" is meant "as accurately as possible". While the placemark is located on the ancient excavations, the excavated ruins could be a small part of the actual ancient location that might have relocated several times in the area during the past 4 millennia.

"Approximate Location" means that despite all my efforts I was unable to locate the exact ancient place on the map. The placemark is on the most commonly accepted location and should be considered accurate within the vicinity of the pin on the map.

"General Location" means that the particular ancient Greek place cannot be pinpointed specifically, but instead it spans the general area around the placemark. Most often in this case a modern city covers the ancient site.

"Probable Location" means that the exact location of a known place could not be accurately pinpointed on the map. The placemark is placed on the most likely location.

While satellite imagery offers extraordinary accuracy of the contemporary topography, the reader should be cautioned that ancient landscape, and especially the coastline might have been considerably different than today. Good examples of this fact are the locations of Troy, Miletos, and Thermopylae. The ancient places existed next to the coast or a large harbor while today they appear landlocked. In several such cases, I have drawn the ancient coastline after considerable research, and I hope to add more in the future.

Did you see an error or an omission? Do you have have more accurate information about a place on the map?

Send me an email and help me improve the accuracy of this map.