Treasury of the Athenians 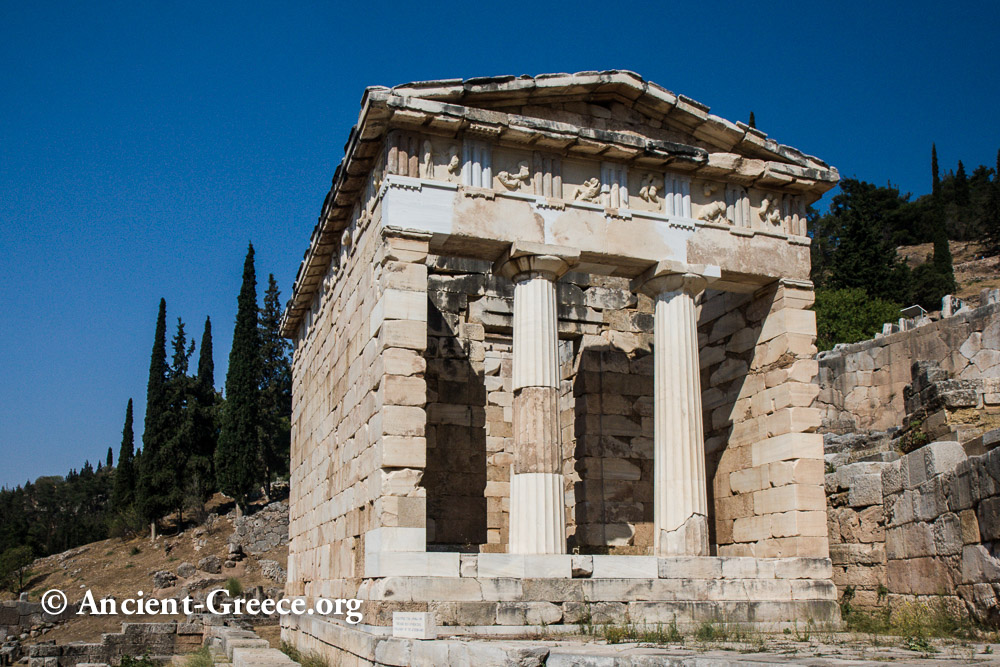 The restored Treasury of the Athenians at Delphi.

The Athenian Treasury was a votive building in the form of a reduced scale temple, designed to hold the multitude of Athenian offerings to the Delphi oracle. The building was constructed entirely of Parian marble and had a Doric frieze decorated with 30 metopes. It is a distyle in antis building with a porch before the entrance to the cella, measuring 10 x 6 meters.

The metopes depicted mythological themes of Theseus, Heracles, and Amazons in high relief. It is believed that two Athenian sculptors carved the metopes, each representing a distinct style or generation: one from the Archaic period, and one from the Severe style of classical art (the transition from Archaic to High Classical art). The walls of the treasury were inscribed with various texts, among which are the hymns to Apollo which included melody notation (see below).

Several dates for it's construction have been suggested (with Pausanias mentioning that it was built after the battle of Marathon), but it is widely accepted that its was created sometime between 510 and 480 BCE, a period framed by the founding of the Athenian democracy and the defining battle of Marathon. It remained intact to modern times mainly because it remained in use as a house of pawnbrokers (their names are inscribed on the walls to mark each pawnbroker's place).

To the left of the treasury, in a highly visible triangular area the Athenians displayed the actual spoils from the battle of Marathon. A large inscription at its front described what the visitors were witnessing: "The Athenians to Apollo from the spoils of the Persians at the Battle of Marathon."

The Metopes and Art of the Athenian Treasury