Temple of Poseidon in Sounion 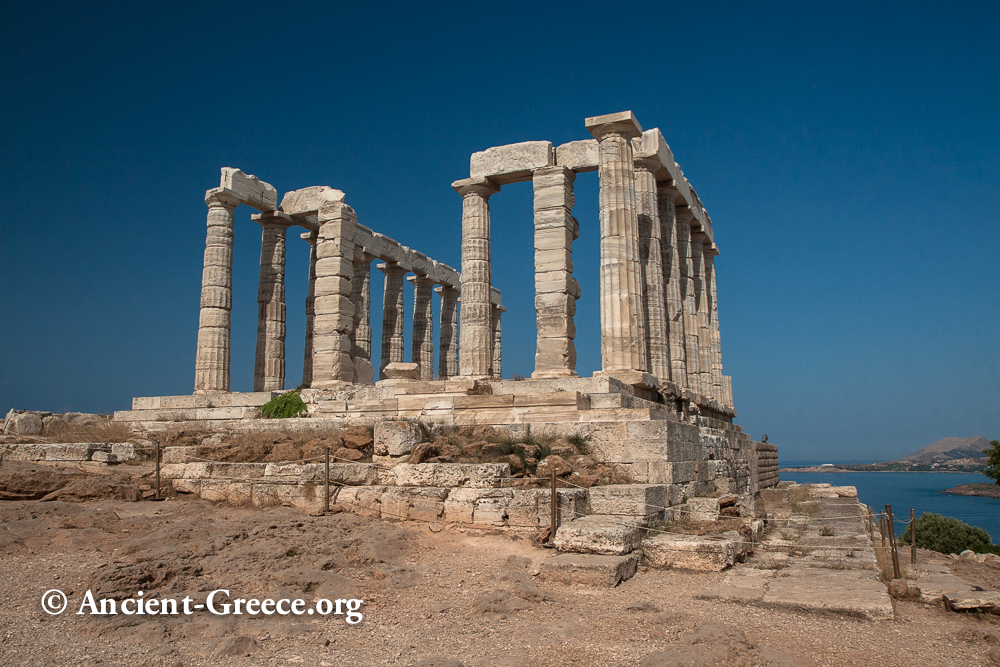 The Temple of Poseidon

Archaeological evidence indicates that Sounion was a sacred area as far back as the Bronze Age, but the temple visible in our day was built in the middle of the 5th century BCE (between 444 and 440 BCE). It was part of the ambitious building project initiated by Perikles, which included other renown temples such as the Parthenon and the Hephaisteion. Given the similariteis of the Temple of Poseidon to the Hephaisteion and the temple of Nemesis in Rhamnous, many historians have concluded that they were designed by the same architect. One particularly unifying feature of all three temples is the fact that the columns of the porch were aligned with the third column of the peristyle.

An inscription confirms that the temple was dedicated to Poseidon, and it was built upon the remains of an even earlier poros temple whose foundations are still visible. This Archaic temple was razed by the Persians in 490 BCE when it still under construction. Very little is known about this earlier temple, but it is certain that it was a revered landmark, visible from afar as sailors approached or left the safety of the Attica harbors. The newer temple closely follows the size and plan of the more ancient one.

The temple of Poseidon was a peripteral building of the Doric order, made of marble from nearby Agrileza, with six columns at its ends and thirteen on each long side for a total of 34--of which thirteen survive today. Four of the north columns were reconstructed in the late 1950's. The Doric colums are about 20 feet tall and three feet in diameter, with the unusual number of 16 flutes instead of the usual 20. The base of the temple consists of two stacked terraces that supported the peristyle, the cella, the pronaos, and the opisthodromos. The temple's stylobate is 31.1 x 13.4 meters.

The temple's metopes were smooth with no decoration, but the architrave of the pronaos was decorated with a shallow Ionic continous frieze. The frieze's fragments that have survived are baddly erroded but it is believed they illustrated popular mythological themes of amazonomachy (or a battle between Centaurs and Lapiths), gigantomachy, and the deeds of Theseus. They were carved in white marble from Paros. The pediments' raking cornice had a pitch of 12.5° (instead of the usual 15°) and were decorate with sculptures, of which only one fragmented seated female figure has survived.

Sanctuary of Athena at Sounion