At the approximate position where the Parthenon was built later, the Athenians began the construction of a building that was burned by the Persians while it was still under construction in 480 BCE. It was presumably dedicated to Athena, and after its destruction much of its ruins were utilized in the building of the fortifications at the north end of the Acropolis. Not much is known about this temple, and whether or not it was still under construction when it was destroyed has been disputed. Its massive foundations were made of limestone, and the columns were made of Pentelic marble, a material that was utilized for the first time. The classicalParthenon was constructed between 447-432 BCE to be the focus of the Acropolis building complex. The architects were Iktinos and Kallikrates (Vitruvius also names Karpion as an architect) and it was dedicated to the goddess Athena Pallas or Parthenos (virgin). The temple’s main function was to shelter the monumental statue of Athena that was made by Pheidias out of gold and ivory. The temple and the chryselephantine statue were dedicated in 438, although work on the sculptures of its pediment continued until completion in 432 BCE. 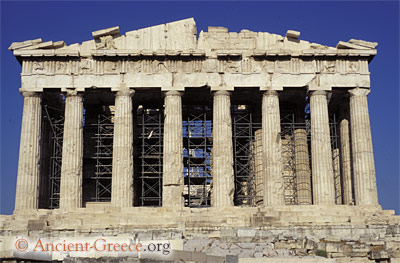 The Parthenon construction cost the Athenian treasury 469 silver talents. While it is almost impossible to create a modern equivalent for this amount of money, it might be useful to look at some facts. One talent was the cost to build one trireme, the most advanced warship of the era. (http://www.brown.edu/Departments/Classics/CL56/CL56_LN11.html), and
“…one talent was the cost for paying the crew of a warship for a month” (D. Kagan, The Peloponnesian War, 61). According to Kagan, Athens at the beginning of the Peloponnesian war had 200 triremes in service, while the annual gross income of the city of Athens at the time of Perikles was 1000 talents, with another 6000 in reserve at its treasury.

The Parthenon is a temple of the Doric order with eight columns at the façade, and seventeen columns at the flanks, conforming to the established ratio of 9:4. This ratio governed the vertical and horizontal proportions of the temple as well as many other relationships of the building like the spacing between the columns and their height.

The cella was unusually large to accommodate the oversized statue of Athena, confining the front and back porch to a much smaller than usual size. A line of six Doric columns supported the front and back porch, while a colonnade of 23 smaller Doric columns surrounded the statue in a two-storied arrangement. The placement of columns behind the statue was an unusual development since in previous Doric temples they only appeared on the flanks, but the greater width and length of the Parthenon allowed for a dramatic backdrop of double decked columns instead of a wall.

The back room sheltered Athena’s treasure and four columns of the Ionic order supported its roof. The introduction of elements of the Ionic order in a predominately Doric temple was more dramatic in the development of a continuous freeze on the exterior wall of the cella. While the integration of Doric and Ionic elements on the same temple was not a new development in Greek architecture, it was rare, and bestowed on the Parthenon a delicate balance between austere and delicate visual characteristics.

All temples in Greece were designed to be seen only from the outside. The viewers never entered a temple and could only glimpse the interior statues through the open doors. The Parthenon was conceived in a way that the aesthetic elements allow for a smooth transition between the exterior and the interior that housed the chryselephantine statue of Athena. A visitor to the Acropolis who entered from the Propylaia would be confronted by the majestic proportion of the Parthenon in three quarters view, with full view of the west pediment and the north colonnade. As the viewer moved closer, the details of the sculpted metopes would become decipherable, and when in proximity to the base of the columns, parts of the frieze would become evident in tantalizing colorful glimpses peering from the spaces between the columns.

Moving towards the east and looking up towards the exterior of the cella, a visitor would be mesmerized with the masterful depiction of the Panathenaic procession as it appeared in cinematic fashion on the frieze which was visually interrupted by the Doric columns of the exterior. This was certainly a scene that every Athenian could relate to through personal experience, making thus the transition between earth and the divine a smooth one. A visitor moving east would eventually turn the corner to face the entrance of the Parthenon, and there he would be confronted with the birth of Athena high above on the east pediment, and just beyond it, the arrephores folding the peplos among the Olympian gods and the heroes of the frieze.  Then, just below, the “peplos” scene, through the immense open doors, any visitor would be enchanted by the glistening gold and ivory hues of the monumental statue of Athena standing at the back of the dim cella. The statue of Athena Pallas reflected its immense stature on the tranquil surface of the water-pool floor, and was framed by yet more Doric columns, this time smaller, in a double-decked arrangement that made the interior space seem as if it were even larger and taller than the exterior.

It seems certain that the master planners of the Parthenon conceived it as a theatrical event. The temple was constructed with the movements of the viewer in mind, and by the arrangement of the temple, the monumental sculptures of the pediment, and the detailed frieze, the emotions of the visitors were choreographed to prepare them for the ultimate glimpse of the majestic Athena Parthenos at the interior of the naos, and to maximize the effect of an awe inspiring visit.

Texts Related to the Parthenon