The Kore statues dominate votive sculpture on the Acropolis during the early archaic period.

The preoccupation with accurate depiction of the human figure however is well represented in a number of male statues.

One fine example of early Attic Kouros is the “Moschoforos” or Calf Bearer. The statue is unique in that it does not depict a single figure, nor a group of figures, but a man and a calf closely bound in an exquisite composition. The arrangement guided the sculptor to depict the arms crossed across the chest of the man as he holds the calf’s legs in a large “X”. The calf is naturally settled by its weight on the man’s shoulder as it turns its head to face the viewer. While the statue is defined with the typical geometric planes of the Archaic era, certain areas of the figure are rendered in a much more smooth manner as the muscles of the forearms are described in stone.

Another composition that involves a man and an animal is the “Rampin Horseman”. The statue’s head is at the Louvre museum in Paris, replaced in the Acropolis museum by an exact plaster cast. One of the most important aspects of the “Rampin” statue is a subtle turn of the torso towards the right as the head turns distinctly towards the left, an attempt to brake free from the strict symmetry of the past.

This endeavor to achieve higher accuracy of form and movement is evident in the Blond Boy head, and the Kritios boy, statues representative of the transitional period between Archaic and Classical eras.

A multitude of relief  sculptures have been unearthed at the Acropolis as well. The shallow relief depicting Pensive Athena resting her head on her lance in contemplative mood is indicative of the switch in attitudes in ancient Greece from the naïve, and joyous one to a more somber outlook (ca 470 BCE). 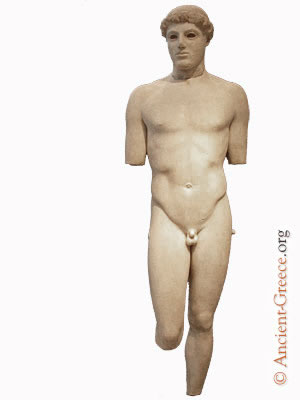 The Kritios boy belongs to the Late Archaic period and is considered the precursor to the later classical sculptures of athletes. The Kritios or Kritian boy was thus named because it is believed to be the creation of Krito, the teacher of Myron, from around 480 BCE. The statue is made of marble and is considerably smaller than life-size at 1.17 m (3 ft 10 ins).

With the Kritios Boy the Greek artist has mastered a complete understanding of how the different parts of the body act as a system. The statue supports its body on one leg, the left, whiles the right one is bent at the knee in a relaxing state. This stance forces a chain of anatomical events as the pelvis is pushed diagonally upwards on the left side, the right buttock relaxes, the spine acquires an “S” curve, and the shoulder line dips on the left to counteract the action of the pelvis (contra-posto).

The Kritios Boy exhibits a number of other critical innovations that distinguish it from the Archaic Kouroi that paved its way. The muscular and skeletal structure are depicted with unforced life-like accuracy, with the rib cage naturally expanded as if in the act of breathing, with a relaxed attitude and hips which are distinctly narrower. As a final fore bearer of the classical period, the “smile” of Archaic statues has been completely replaced by the accurate rendering of the lips and the austere expression that characterized the transitional, or “Severe” period from the Archaic to the Classical era.

More views of the Kritios Boy