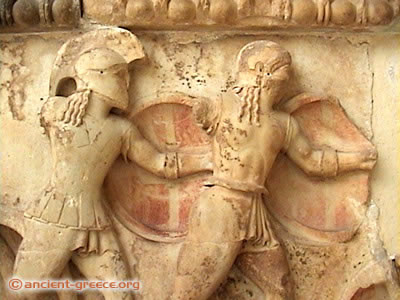 The ancient Greek spiritual beliefs, religion, and oral tradition are all reflected and formulated through rich myths and legends that besides entertainment provided an articulation of the moral fiber of the Greek culture as it evolved through at least two thousand years.

What we call "mythology" today, was a big part of ancient Greek culture and taken as a whole it represent the bulk of what we know as Pagan religion mixed in with the ancients' heritage (the concept of "History" was born later in the 5th c. BCE). As such, it was later suppressed in favor of other religions. But it was so interwoven in Greek culture that it survived over the centuries in bits and pieces of Greek literature and art only to reemerge in the last few hundred years under the safe title "mythology".

The pages herein are a mere point of reference to provide "color" and context to the rich history and culture of ancient Greece.