Aphrodite (aphro-dite = issued from the foam / born of foam)

Aphrodite was the goddess of Beauty and Love. 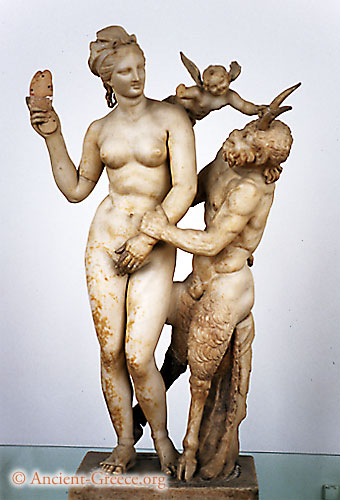 This goddess was the embodiment of love and beauty, eliciting desire from deities and mortals alike. The Iliad cites her as being the daughter of Zeus and Dione, but later poems depict her birth as having sprung from sea foam near the island of Cythera.

One of the most notable legends pertaining to Aphrodite is that of the Judgment of Paris. Paris—a young Trojan prince—was assigned the task of judging Athena, Hera, and Aphrodite and lay to rest the debate of which of them was the fairest. W

hichever goddess he chose was bestowed a golden apple. Rather than judge on looks alone, Paris took into account the bribes set forth by each goddess. Hera spoke of great riches and rule over a vast kingdom; Athena presented wisdom unparalleled to other men; Aphrodite promised marriage to the most beautiful woman on Earth. Paris accorded the victory to Aphrodite and the golden apple was hers. The rape of Helen followed subsequently, and this legend was immortalized and famed in The Iliad as the reason why the Trojan War was fought. Image: Aphrodite of Delos (with Pan)