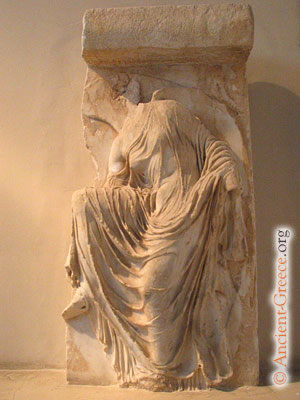 Nike, the goddess of victory, was the daughter of the Titan Pallas, and of Styx, the presiding nymph of the river of that name in the lower world.

In her statues, Nike somewhat resembles Athene, but may easily be recognized by her large, graceful wings and flowing drapery, which is negligently fastened on the right shoulder, and only partially conceals her lovely form. In her left hand, she holds aloft a crown of laurel, and in the right, a palm-branch.

In ancient sculpture, Nike is usually represented in connection with colossal statues of Zeus or Pallas-Athene, in which case she is life-sized, and stands on a ball, held in the open palm of the deity she accompanies. Sometimes she is represented engaged in inscribing the victory of a conqueror on his shield, her right foot being slightly raised and placed on a ball.

A celebrated temple was erected to this divinity on the Acropolis at Athens, which is still to be seen, and is in excellent preservation.

Under the name of Victoria, Nike was highly honoured by the Romans, with whom love of conquest was an all-absorbing characteristic.

There were several sanctuaries in Rome dedicated to her, the principal of which was on the Capitol, where it was the custom of generals, after success had attended their arms, to erect statues of the goddess in commemoration of their victories. The most magnificent of these statues, was that raised by Augustus after the battle of Actium. A festival was celebrated in honour of Nike on the 12th of April.

From: Berens, E.M. The Myths and Legends of Ancient Greece and Rome. New York: Maynard, Merril, & Co., 1880. Text in the public domain.